Today I'm looking at another illustrated broadside by Laurie & Whittle. This copy's catalog entry in the Walpole notes that the paper has an 1814 watermark, and if so would mean that editions of the engraving continued to be printed six years after the initial run - an interesting detail.

Jack stands on the deck of a ship, bidding farewell to a crying woman as a bosun with a stick under his arm blows a call behind him. Behind her back the woman has a piece of paper labeled "Will & Power", which is explained in the final verse of the song:


Now, as along the beach she stray'd,
Quite forgot was poor Johnny,
Eagerly, instantly, off she sped,
Clean into the arms of her Tommy.
Close in her arms did she him embrace,
She call'd him her joy and her honey,
How the hell cou'd you think, that I lov'd that there man,
'Twas only to finger his money. 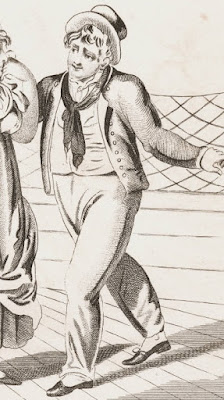 Jack wears tie shoes, light-colored stockings, and long trousers that are tight at the ankle. His jacket has small buttons and is worn open, revealing a light colored waistcoat and a long neck-cloth hanging outside his waistcoat, with the knot around his breastbone and the ends reaching down to his navel. His shirt collar is buttoned. On his head he has a round hat with a narrow brim and slightly-sloped crown, pushed jauntily back to reveal short, curly hair.
Posted by Unknown at 3:30 AM