The Use of a Gentleman or Patronage for the Admiralty (1810) 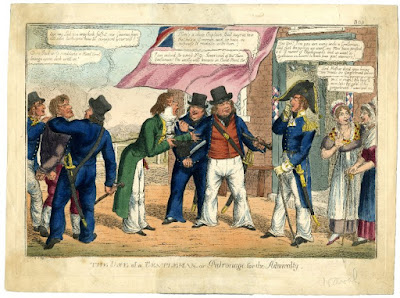 The Use of a Gentleman or Patronage for the Admiralty. Published by Thomas Tegg, London. Undated; c. 1810. The British Museum.

The undiscerning nature of the press gang appeared frequently in 18th century caricatures like The Liberty of the Subject (1779), but in this 19th century update the artist mocks the results of the press laying their hands on members of the social elite. 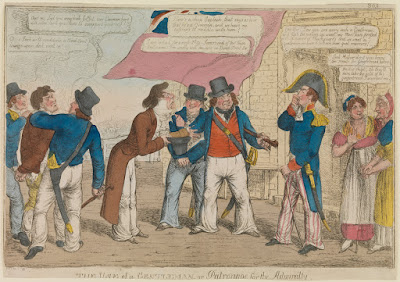 The Use of a Gentleman or Patronage for the Admiralty. Royal Museums Greenwich copy.

The scene shows two gentlemen in fashionable civilian clothes pleading their case to an officer. Their exaggerated clothes and posture are contrasted with the round and solid plainness of the sailors, and their useless refinements in contrast to the blunt, practical effectiveness of the clubs and shackles of the press gang.

One fresh recruits pleads his case, that he is indeed a gentleman who is well known in Bond Street. The officer hopes that the man will be able to teach his crew some manners: "Yes, yes! I see you are every inch a Gentleman, and just the person we want, my men have pressed a d---'d numer [sic] of Blackguards, and we want a Gentleman on board to teach them good manners!" 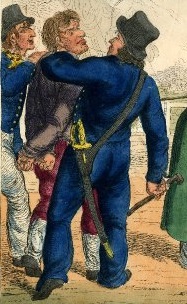 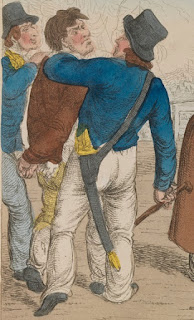 This image shows a few items new to this blog, including men wearing cutlasses with balrdics! The sailor with his back to the viewer wears black pumps, blue (or white) trousers with hems that drag on the ground. Although he carries a solid stick in his right hand he also wears a cutlass on a baldric, with a black scabbard with a yellow chape and locket. His jacket is blue, with buttons painted yellow in the British Museum copy. Shoulder-length brown hair peeps out from under a black round hat.

His mate on the far right left wears white (or light blue, or white being shown in shadow) trousers, a blue jacket, and a yellow handkerchief with red spots. Brown curly hair peeping out from under a black round hat completes the look. 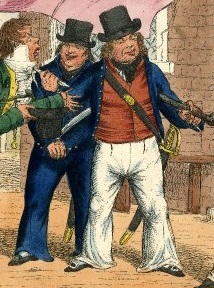 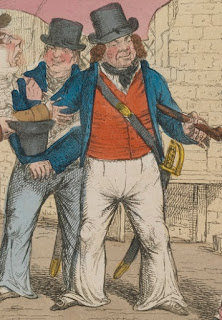 The central two sailors offer much to look at. The man on the left wears black buckled shoes, dark blue (or light blue, or white being shown in shadow) trousers, again with wide legs and cuffs that drag on the ground. a blue jacket (with small yellow buttons in the British Museum copy), and a black hat with a tightly-curled brim, with straight brown hair peeping out from under it. In the British Museum's copy his waistcoat is indistinguishable from his jacket and his handkerchief is black, while in the Royal Museums Greenwich print his waistcoat and handkerchief are white.

The sailor at the center of the print is colored almost the same in both versions. He stands with his legs wide, wearing small buckled shoes, white stockings, and broadfall trousers with very wide legs and cuffs that drag extremely on the ground. He wears a red waistcoat, white shirt, and black handkerchief. His blue jacket has gold buttons in the British Museum copy - the only difference. He also wears a cutlass on a baldric, though he carries a stout cudgel under one arm. Brown curly shoulder length hair peeps out from a round hat with tightly-curled sides and a piece of string tied around the hatband.
Posted by Ben Bartgis at 8:01 PM